Astrachan Artistry In the News 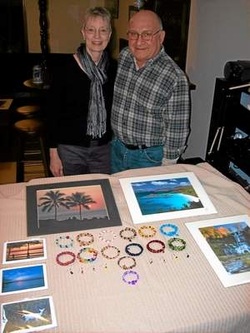 Your Neighbor: Mary Jo and Howard Astrachan display beautiful artworkPhoto by Mike JaquaysFormer Canastota High School teachers Mary Jo Astrachan, left, and her husband Howard Astrachan pose with some of her jewelry and his photography at their Oneida home on Nov. 1, 2013.

ONEIDA >> Mary Jo and Howard Astrachan have found a creative way to fill their lives since retiring from their teaching jobs at Canastota High School.

She makes colorful, personally-crafted beaded jewelry and he takes striking nature photos, and they travel all over the Central New York area selling their wares at craft shows.

“It’s addicting,” Mary Jo admits. “It’s fun, creative, and different from what we did for 30-plus years teaching.”

Not all that much different, though. She said often people will come to their booth asking questions about her “Beadfriended” jewelry and his “H. Astrachan Photography” creations. Collectively they call themselves “Astrachan Artistry.”

Mary Jo is from Hornell originally while Howard hails from Waterloo. They met in the dining hall of Geneseo College back in 1967 when they were both students there and married on July 18, 1971.

The couple have three children, Rachael, Aaron, and Leah, and four grandchildren with another on the way, plus four granddogs.

He retired in 2003, while she followed in 2004. Both are still involved in education, however … Mary Jo is a volunteer docent with the Oneida Community Mansion House while Howard works part-time as a consultant for an educational software company.

Their retirement gave them more time to devote to their hobbies and turn them into something a bit more, so Mary Jo started making even more jewelry items while Howard took more photos.

Mary Jo said it was a BOCES course she took in 2002 that got her interested in making her beaded jewelry. She and her neighbor had heard about the course and thought it sounded interesting, so they tried it out and quickly became hooked on making the colorful crafts. Today she crafts more than 250 bracelet styles and more than 115 earrings.

“I think it all goes back to the love I had for my brother’s marbles, especially the cat’s eyes. But they were boys’ toys so I couldn’t have my own. I think this is all about marble envy,” Mary Jo said.

Meanwhile, Howard was having some challenges in taking family photos as their children were growing up. He joked that all too often the pictures came back without any kids in them -- he always seemed to have more of an eye for nature scenes, so he focused on them instead.

“I was always getting yelled at to take pictures of the kids instead of the scenery,” Howard recalled.

When Mary Jo asked him once what he was up to while she was gone, he replied he took pictures of dew drops all day. Today, nature scenes -- especially water and waterfalls -- are his specialty.

“The house was filling up with beads, so I decided I had to do something of my own,” he said.

In March 2004 they brought together her jewelry and his photography for a Special Olympics benefit craft show at the Oneida High School. They only sold a few items at that craft show, Mary Jo said, but they were on their way to craft show traveling adventures that now take them north as far as Clayton, south to Hammondsport, west to LaFayette, and east to Herkimer. They also show their wares as close as the Madison County Historical Society’s Craft Days in Oneida.

Mary Jo said their shows are very physical as they carry their crafts in when they arrive, stand in their booth all day, and then carry whatever is left back out at the end. They look for juried shows, where crafters have to submit a sample to the shows’ judges for their approval, that are a good fit for them and their crafts, she said.

“We look for venues where the customers will be interested in what we have, and shows that are well organized and well run,” she explained. “A lot of it is trial and error. Some shows we have done only once while we have found others that really work for us.”

This weekend, they are showing their creations at the Clinton Fine Arts & Crafts Show at the Clinton High School, and will be there today from 10 a.m. to 4 p.m. This will be their second year at the show, an annual fundraiser for school programs.

It’s the camaraderie between the fellow dealers as well as the craft show visitors that is Howard’s favorite part of showing their creations.

“I like talking to other people about what we do,” he said. “We see a lot of the same people at the shows and we all try to help each other with ideas. And when someone comes to our booth and sees something they would like to have in their own homes that’s quite a compliment to me.”

Whether or not they come away with a pocket full of profit isn’t what the shows are about for the artisans behind Astrachan Artistry.

“This is a hobby, something we both enjoy doing and not necessarily an income for us,” Mary Jo said. “We do it because we love it. When you’re a teacher raising a family you really don’t have time for hobbies so we are making up for that now.”